Unintentionally surreal is probably the closest to a definition I can reach for Tierra Santa in Buenos Aires. For those out there who thought there was a need develop ostentation of the ‘Glow-in-the-dark’ Virgin Mary into a whole park of it’s own then ‘The Holy Land’ embodies it.

An Argentinian dressed in full Roman soldier attire directs you towards the clay models of biblical scripture where the intention becomes clear. It’s Disneyland for Jesus. Though this in itself is an oxymoronic wonder of sorts, when the animatronic show depicting the nativity begins, you know your entering another realm. 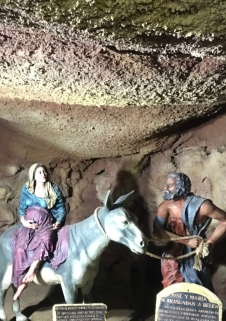 Perhaps even stranger is the fact that the robotic cow seems to have more moving parts and realism then the Virgin Mary further beggars belief. Likewise, the Garden of Eden show expends far more time introducing a Lion, Hippopotamus, Gorilla, Rhino & Giraffe all sharing the same jungle environment before Adam and Eve make a brief – yet awe inspired – entrance, complete with dignity-protecting fig leaves, at its conclusion.

However, coupled with these child-friendly indoctrination techniques, were the more unnerving clay depictions of the torture and execution of the park’s hero – Jesus. There was something distinctly entertaining to the event – in lieu of spiritual – where you could pose for photos beside statues of Jesus being flogged.

Although, the most surreal feature was the audience – not the performances – as without fail they would clap at the end of the animatronic shows. This left me thinking little except, for whom are you clapping? This was particularly true of the ‘Last Supper’ performance, where I was left wondering, are you clapping for his imminent betrayal?

The climax of the park was the – on the hour every hour – resurrection where a 20 meter robotic Jesus appeared through the top of a clay mountain turning towards the crowd as Hallelujah blared through the speakers.

As an atheist I was left bemused but thinking at least its more interesting then the dusty rosary I remember having to recite on cold country nights as midges ate at you ears near the grotto.