Sharing a Flaw with Da Vinci 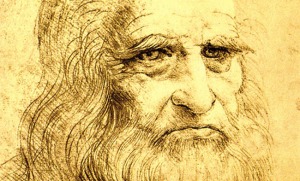 I don’t believe that it’s often people find resemblance between themselves and great men in terms of personality defects. However, in this case I find the comparison quite pertinent. It’s been said of Da Vinci that he often grew dispassionate about some projects once he had fully planned them. This is one reason given for that fact that he didn’t complete many of his projects. His interest was simply drawn to other areas. I must admit that recently – more than ever – I have been identifying with this ‘flaw’ (for lack of a better term to describe it).

I’ve been working on a screenplay – Downward Mobility – & have just finished writing the treatment for it. I have yet to even begin putting pen to paper in terms of dialogue. However, I already know the intricate details of the story. I’m aware that this is an integral part of the writing process and without which I might as well abandon my character in a desert without map or mission. Moreover, it’s virtually impossible to argue with the sage wisdom of planning.

Nevertheless, I can’t help that Da Vicinal desire to move on to a new project, now that the plan is done. It feels as though I’m settling down to the arduous task of combing through dialogue for consistency before submitting to an agent. As oppose to cracking the shell of creativity and relishing in the initial freshness of the task. In essence, the idea feels stale before it’s even fully-baked.

Still, I must bear in mind that though Da Vinci left some pieces unfinished, he created the greatest works of all time. Therefore, perhaps when something is worth pursuing the mind adjusts – or at least perseveres – in order to produce it. Therefore, maybe the true enjoyment and proverbial nectar of this project are yet to be realised.