Home is all around us 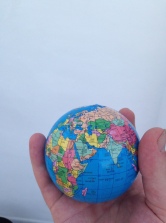 The more I travel the more I realise that everywhere is the same. I’m not saying this in the sense that it’s a negative thing, or in the sense that we live in a globalised world where trends tend to be universal. I’m saying it in the sense that we – people – are pretty much the same the world over. I’m sitting in a Café in Tenerife drinking a coffee and watching people interact with each other. A man sits with his girlfriend. Two old friends have a conversation and a woman feeds her baby.

However, if we remove the minor differences – language, dress and location – then what is really to differentiate this from a Ger in Mongolia, a bar in Moscow, a kebab house in Istanbul or a Gypsy camp in Romania? The truth of the matter is nothing. People are the same the world over. We have the same value systems, the same motivations and the same desires. It’s not my intention here to romanticize the world around us.

By the same logic there are also those that strive to harm others, to corrupt or be corrupted and to strive against their better nature. However, it is through these things also that we can see the universality of the human condition. It never ceases to amaze me how people try to see themselves as different from others. How they strive towards barbaric, tribal ideals of difference in the forms or nationalism and racism. It is something recurring in people and the ways in which they engage with each other.

And yet, it lacks any kind of logic and reason. It makes absolutely no sense. I can sit in a Ger in Mongolia and see my uncle in the face of a nomadic herder. I can see my grandmother in an elderly Gipsy woman. I can see an old friend in the face of a Canarian man. So why can people honestly believe that we are different?

One response to “Home is all around us”