Milton: The Writer as a Dairy Cow? 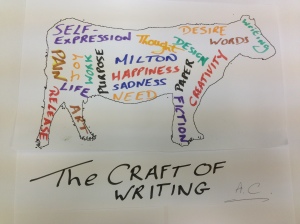 John Milton – after going blind in his later years – was heard to have walked around the house muttering ‘I want to be milked. I want to be milked.’ Though this seems like a symptom of dementia; it was in fact his way of describing his frustration to write when his squire was late to transcribe what he said. However, even with this qualification, the analogy does seem rather ludicrous at first glance. Can the act of writing really be described as the release a cow gains from being milked?

I have always thought the idea possible if not somewhat strange. That was until I found myself playing with a story idea for two full weeks without simultaneously having the time and the mental capacity to write. The story I’m referring to is ‘Hopeless Faith’ which is the first fictional piece I’ve published on this blog. I found my mind clogged as it were. The idea seemed to almost grow tumour-like in my head bringing with it an ever-increasing level of frustration.

And then – by utter contrast – the story erupted out of me in what can be described as little less than a frenzy of words. I had only an idea at the time of writing. It was a One Act play about a Priest who gave up on love to join the church. And from this in a matter of minutes, well two hours, I had written the entire piece, and aside from a few grammatical errors, I left it unedited.

It was as if the whole concept had been building and building in my subconscious ready to be unleashed. Alternatively – as Milton might put it – I needed ‘to be milked’.

One response to “Milton: The Writer as a Dairy Cow?”