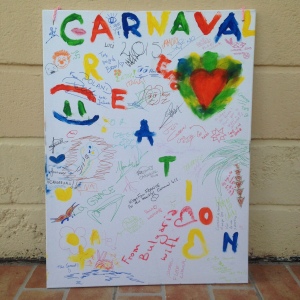 It’s been a while since I’ve posted and this period can only really be described as a creative hiatus. It would be wrong to call it writer’s block because the problem extended far beyond words on a page. It was more of a shutting down of creative thought. It’s curious that periods like effect more than just my writing and creativity. It – at risk of melodrama – corrodes the very sinews of the soul and chips away at my sense of purpose.

Writing and creating are towards the heart of my sense of being, if they are interrupted I feel lost.

Last year, I wrote an article about creating an artwork from chaos. I went to Tenerife’s Carnaval. It’s an event whose Christian origins are, thankfully, lost in a sea of beer, urine and colourful costumes, storming with the beats of Spanish salsa sounds. I arrived – as before – with a blank canvas, paint and colouring markers intent of creating another piece with the help of the masses.

The theme for this year’s festival, something I was lacking myself at time of the festival, creativity. The physical results of which can be observed above. However, probably the greatest achievement of which though was undoubtedly a further observation on the collective human subconscious.

I asked people to create. Simply this. There was no theme or task. Only one rule: draw, don’t write. In this sense, as the picture can attest to, the challenge failed to achieve this goal. However, what’s noteworthy is why it failed. I was asking people to do something that left them very open to failure and error. Most of us can write a little message and fewer can draw or paint something they deem acceptable to remain.

However, even fewer are willing to take the risk and permanently mark something with the innermost depths of their creativity without at least some time to think it over. Having a person tell you to create without time or a focus is a difficult ask – for an adult that is.

Young children, on the other hand, are far quicker to scribble something – at times indecipherable – on a page. They haven’t developed that tragic flaw that most of us have as adults. That fear that it won’t be good or won’t be what was expected of us.

I wonder – as I write this planned blog entry which I with undoubtedly proofread and have critiqued before I post it – when is this creative sincerity lost?

I know that I shall strive to recover mine as I return to expressing myself through this blog.